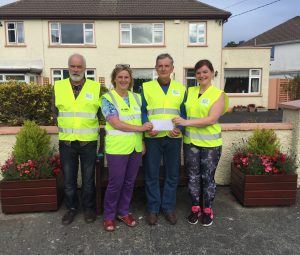 John said “I am delighted to note that overall the standard continues to improve throughout the Resident Associations, making adjudication more challenging each month. Noticeable improvements were visible in the management of litter control and this placed nine of the twenty two entrants in contention for prizes in July.

John concluded by saying he looked forward to seeing this trend grow over the coming months of this competition.

People present for presentation of cheques were –as in the photos–

Fantastic news Sligo Cycling Campaign. We look forward to working with you on this. ... See MoreSee Less

Sligo Tidy Towns are delighted to be a corporate benefactor of the Lest Sligo Forgets project.

This is one of a number of community gardens we have supported and we are delighted with the progress of this project.

Alas with COVID it was not possible to get a photograph with the Lest Sligo Forgets team.

We are looking forward to the opening of this memorial later in the year. ... See MoreSee Less