The focus for the Green Aware Campaign again this year is on Reducing Food Waste.  By reducing food waste you are not only being environmentally sustainable, you are saving your business money!

Hotels, Restaurants, cafes and pubs are being asked to commit to ‘Reducing food waste; Reusing what they can; Recycling & Composting and Thinking before they buy!

Businesses that support the campaign will display a window sticker committing to being ‘Green Aware’.

Some interesting facts on food waste:

While the cost of a ‘Brown Bin’ collection is less than €10, the real cost is approximately €150. That is €150 walking out the back door! This includes the cost of purchasing the food; processing it; storing it; cooking it.

The quantity of Food Waste in the US is more than enough to feed the 800 million people worldwide who face hunger every day.

The Campaign is being launched in advance of the St. Patrick’s Day Festival in Sligo to ensure that awareness of food waste is to the forefront of Businesses during this busy time.

We are asking the public to support Businesses who commit to environmentally sustainable measures. Look out for the Sticker 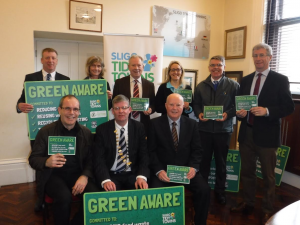 Fantastic news Sligo Cycling Campaign. We look forward to working with you on this. ... See MoreSee Less

Sligo Tidy Towns are delighted to be a corporate benefactor of the Lest Sligo Forgets project.

This is one of a number of community gardens we have supported and we are delighted with the progress of this project.

Alas with COVID it was not possible to get a photograph with the Lest Sligo Forgets team.

We are looking forward to the opening of this memorial later in the year. ... See MoreSee Less